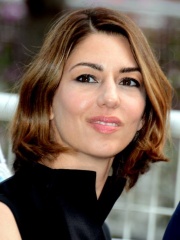 Sofia Carmina Coppola (, Italian: [ˈkɔppola]; born May 14, 1971) is an American screenwriter, director, producer, and actress. The daughter of filmmakers Eleanor and Francis Ford Coppola, she made her film debut as an infant in her father's acclaimed crime drama film, The Godfather (1972). Coppola later appeared in a supporting role in Peggy Sue Got Married (1986) and portrayed Mary Corleone, the daughter of Michael Corleone, in The Godfather Part III (1990). Read more on Wikipedia

Since 2007, the English Wikipedia page of Sofia Coppola has received more than 6,138,177 page views. Her biography is available in 56 different languages on Wikipedia making her the 347th most popular film director.