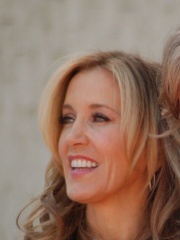 Felicity Kendall Huffman (born December 9, 1962) is an American actress. She is the recipient of numerous accolades including a Primetime Emmy Award, a Golden Globe Award, three Screen Actors Guild Awards, and has been nominated for an Academy Award. Huffman began her acting career in theatre, and in the 1990s also had many supporting roles in film and television. Read more on Wikipedia

Among actors, Felicity Huffman ranks 1,708 out of 10,030. Before her are Nell Gwyn, Mickey Hargitay, Rachel Félix, Miranda Richardson, Per Oscarsson, and Peter Capaldi. After her are David Arquette, Sebastian Koch, Vince Vaughn, Brad Dexter, Peter van Eyck, and Tom Bosley.