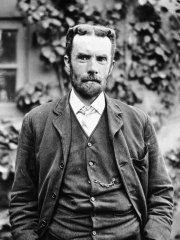 Oliver Heaviside FRS (; 18 May 1850 – 3 February 1925) was an English mathematician and physicist who brought complex numbers to circuit analysis, invented a new technique for solving differential equations (equivalent to the Laplace transform), independently developed vector calculus, and rewrote Maxwell's equations in the form commonly used today. He significantly shaped the way Maxwell's equations are understood and applied in the decades following Maxwell's death. His formulation of the telegrapher's equations became commercially important during his own lifetime, after their significance went unremarked for a long while, as few others were versed at the time in his novel methodology. Read more on Wikipedia

Oliver Heaviside was a British mathematician, physicist, and electrical engineer who is most famous for his work in the field of electricity and electromagnetism.