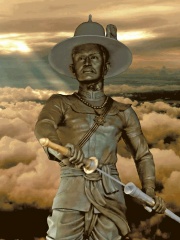 King Taksin the Great (Thai: สมเด็จพระเจ้าตากสินมหาราช, RTGS: Somdet Phra Chao Taksin Maharat, listen ) or the King of Thonburi (Thai: สมเด็จพระเจ้ากรุงธนบุรี, RTGS: Somdet Phra Chao Krung Thon Buri; simplified Chinese: 郑昭; traditional Chinese: 鄭昭; pinyin: Zhèng Zhāo; Teochew: Dên Chao; April 17, 1734 – April 7, 1782) was the only king of the Thonburi Kingdom. He had been an aristocrat in the Ayutthaya Kingdom and then was a major leader during the liberation of Siam from Burmese occupation after the Second Fall of Ayutthaya in 1767, and the subsequent unification of Siam after it fell under various warlords. He established the city of Thonburi as the new capital, as the city of Ayutthaya had been almost completely destroyed by the invaders. Read more on Wikipedia

Taksin was a Thai King who overthrew the old dynasty and established the Thonburi Kingdom. He is most famous for his leadership in the face of the Burmese invasion and the resulting Siamese-Burmese War.

Page views of Taksins by language

Among politicians, Taksin ranks 2,988 out of 15,577. Before him are Macbeth, King of Scotland, Souphanouvong, Ismail Qemali, Yazdegerd II, Leopold I, Duke of Austria, and Charles Emmanuel IV of Sardinia. After him are Armand Fallières, Julia Maesa, Andreas Papandreou, Djedkare Isesi, Francis Phoebus of Navarre, and Archduchess Maria Maddalena of Austria.