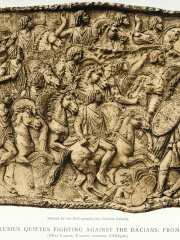 Lusius Quietus (Latin: Lusius Quiētus, pronounced [ˈɫʊsi.ʊs kᶣiˈeːtʊs]; Koinē Greek: Λούσιος Κυήτος, romanized: Loúsios Kyítos, pronounced [ˈlusi.os kyˈitos]) was a Roman Berber general and 11th legate of Judaea in 117–120. He was the principal commander against the Jewish rebellion known as the Kitos War (Kitos is a later corruption of Quietus). As both a general and a highly acclaimed commander, he was notably one of the most accomplished Berber statesmen in ancient Roman history. Read more on Wikipedia

Among people born in 100, Lusius Quietus ranks 36. Before him are Valentinus, Marinus of Tyre, Gan Ying, Vologases III of Parthia, Simon bar Giora, and Apollos. After him are Aquila of Sinope, Pope Anianus of Alexandria, Carpocrates, Publius Clodius Thrasea Paetus, Epaphras, and Quadratus of Athens. Among people deceased in 118, Lusius Quietus ranks 2. Before him is Saint Eustace.