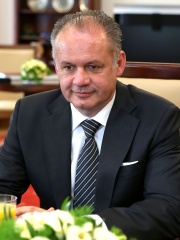 Andrej Kiska (Slovak pronunciation: [ˈandrej ˈkiska]; born 2 February 1963) is a Slovak politician, entrepreneur, writer and philanthropist who served as the fourth president of Slovakia from 2014 to 2019. He ran as an independent candidate in the 2014 presidential election in which he was elected to the presidency in the second round of voting over Prime Minister Robert Fico. Kiska declined to run for a second term in 2019. Read more on Wikipedia

Among politicians, Andrej Kiska ranks 6,778 out of 15,577. Before him are Emperor An of Jin, Lucius Licinius Crassus, Lusius Quietus, Robert Surcouf, Veleda, and Nabih Berri. After him are Nikolay Pavlovich Ignatyev, Tiglath-Pileser II, Margravine Hedwig Sophie of Brandenburg, Sophie Blanchard, Nikolai Voznesensky, and Władysław Raczkiewicz.