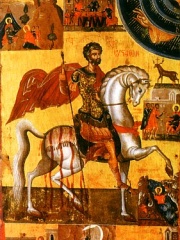 Saint Eustace (Latinized Eustachius or Eustathius, Greek Εὐστάθιος Πλακίδας Eustathios Plakidas) is revered as a Christian martyr. According to legend, he was martyred in AD 118, at the command of emperor Hadrian. Eustace was a pagan Roman general, who converted to Christianity after he had a vision of the cross while hunting. Read more on Wikipedia

Saint Eustace is most famous for being a Roman soldier who converted to Christianity and became a martyr.

Among religious figures, Saint Eustace ranks 497 out of 2,238. Before him are Ahmed Yassin, Korah, Peter the Hermit, Pope Stephen I, Pope Miltiades, and Pope Caius. After him are Eric IX of Sweden, Jethro, Saint Marinus, Pope Eleutherius, Sabbas the Sanctified, and Josemaría Escrivá.

Among people born in 10, Saint Eustace ranks 5. Before him are Matthew the Apostle, Mark the Evangelist, Hero of Alexandria, and John the Evangelist. After him are Tigellinus, Antonius Felix, Gaius Suetonius Paulinus, Lucius Annaeus Cornutus, Vardanes I, Gotarzes II of Parthia, and Minjung of Goguryeo. Among people deceased in 118, Saint Eustace ranks 1. After him is Lusius Quietus.