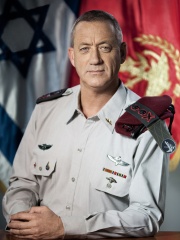 Benjamin Gantz (Hebrew: בִּנְיָמִין "בֵּנִי" גַּנְץ‎; born 9 June 1959) is an Israeli politician and retired army general serving as alternate prime minister of Israel and minister of Defense since 2020. He served as the 20th chief of General Staff of the Israel Defense Forces (IDF) from 2011 to 2015 and the 17th speaker of the Knesset from 26 March 2020 to 17 May 2020.In December 2018, he established a new political party named Israel Resilience. The party later allied itself with Telem and Yesh Atid to form Blue and White (Hebrew: Kaḥol Lavan), the colours of the Israeli national flag. Read more on Wikipedia

Among politicians, Benny Gantz ranks 4,913 out of 15,710. Before him are Peter II, Duke of Bourbon, Richard, 6th Prince of Sayn-Wittgenstein-Berleburg, Danilo I, Prince of Montenegro, Moses de León, Wilhelm Stuckart, and Peter II of Sicily. After him are Alfonso III d'Este, Duke of Modena, William the Lion, Carl Bildt, Miroslav Filipović, Jeong Mong-ju, and Ragnvald Knaphövde.