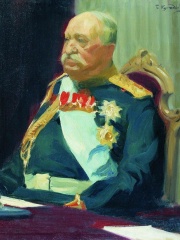 Count Nikolay Pavlovich Ignatyev (historical spelling: Nicolai Ignatieff; Russian: Никола́й Па́влович Игна́тьев; 17 January Old Style (N.S. 29 January) 1832 – 20 June Old Style (N.S. 3 July) 1908), a Russian statesman and diplomat, became best known for his aggressive expansionism in support of Russian imperialism. In dealing with China, he secured a large slice of Chinese territory by the multi-lateral Treaty of Peking in 1860. As the Russian ambassador to the Ottoman Empire from 1864 to 1877, he worked to stir up pan-Slavic feeling and nationalism against the Ottomans, and had some responsibility for the Bulgarian rebellion of April 1876. Read more on Wikipedia

Since 2007, the English Wikipedia page of Nikolay Pavlovich Ignatyev has received more than 54,561 page views. His biography is available in 19 different languages on Wikipedia making him the 6,755th most popular politician.