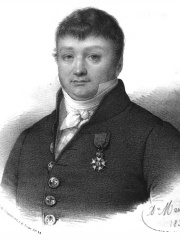 Robert Surcouf (12 December 1773 – 8 July 1827) was a French privateer and slave trader who operated in the Indian Ocean between 1789 and 1801, and again from 1807 to 1808, capturing over 40 prizes. He later amassed a large fortune as a ship-owner, from privateering, commercial activities, the illegal slave trade, and as a landowner.Surcouf started his career as a sailor and officer on the Aurore, Courrier d'Afrique and Navigateur. Having risen to captain, and in spite of the prohibition of slave trading by the National Convention in 1793, he engaged in the business himself as a captain on Créole. Read more on Wikipedia

Among politicians, Robert Surcouf ranks 7,219 out of 15,710. Before him are Anthemius, Arybbas of Epirus, Louis of Cyprus, Eduard Taaffe, 11th Viscount Taaffe, Laimdota Straujuma, and Ernest Louis, Landgrave of Hesse-Darmstadt. After him are Tudḫaliya I, Madius, Jan Peter Balkenende, William Cavendish-Bentinck, 3rd Duke of Portland, Prince John Konstantinovich of Russia, and Ernest, Duke of Bavaria.