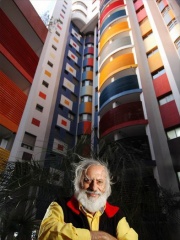 Yaacov Agam (Hebrew: יעקב אגם) (born 11 May 1928) is an Israeli sculptor and experimental artist widely known for his contributions to optical and kinetic art. Read more on Wikipedia

Since 2007, the English Wikipedia page of Yaacov Agam has received more than 203,541 page views. His biography is available in 26 different languages on Wikipedia (up from 25 in 2019). Yaacov Agam is the 63rd most popular sculptor, the 144th most popular biography from Israel (down from 134th in 2019) and the most popular Israeli Sculptor.

Among sculptors, Yaacov Agam ranks 63 out of 190. Before him are Wäinö Aaltonen, Jean-Baptiste Pigalle, Cephisodotus the Elder, Paeonius, Andreas Schlüter, and Andrea Sansovino. After him are David d'Angers, Francesco Laurana, Agoracritus, Magdalena Abakanowicz, Johann Gottfried Schadow, and Robert Morris.

Among SCULPTORS In Israel

Among sculptors born in Israel, Yaacov Agam ranks 1. After him are Dani Karavan (1930).