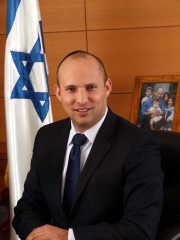 Naftali Bennett (Hebrew: נַפְתָּלִי בֶּנֶט‎, IPA: [naftaˈli ˈbenet]; born 25 March 1972) is an Israeli politician serving as the 13th and current prime minister of Israel since 13 June 2021. He served as Minister of Diaspora Affairs from 2013 to 2019, as Minister of Education from 2015 to 2019, and as Minister of Defense from 2019 to 2020. He has led the New Right party since 2018, having previously led The Jewish Home party between 2012 and 2018.Born and raised in Haifa, the son of immigrants from the United States, Bennett served in the Sayeret Matkal and Maglan special forces units of the Israel Defense Forces, commanding many combat operations, and subsequently became a software entrepreneur. Read more on Wikipedia