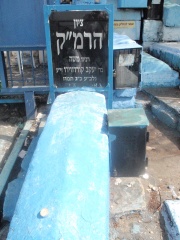 Moses ben Jacob Cordovero (Hebrew: משה קורדובירו Moshe Kordovero ‎; 1522–1570) was a central figure in the historical development of Kabbalah, leader of a mystical school in 16th-century Safed, Ottoman Syria. He is known by the acronym the Ramak (Hebrew: רמ״ק). After the Medieval flourishing of Kabbalah, centered on the Zohar, attempts were made to give a complete intellectual system to its theology, such as by Meir ibn Gabbai. Read more on Wikipedia

Among religious figures, Moses ben Jacob Cordovero ranks 1,119 out of 2,272. Before him are Abo of Tiflis, Dom Justo Takayama, Saint Chrysogonus, Violet Brown, Dayananda Saraswati, and Jubal. After him are Jayadeva, Theodulf of Orléans, John Ball, Anan ben David, Tatiana of Rome, and George Sphrantzes.