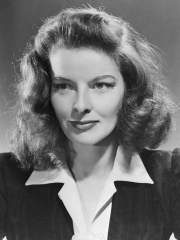 Katharine Houghton Hepburn (May 12, 1907 – June 29, 2003) was an American actress and leading lady in Hollywood for more than 60 years. She appeared in a range of genres, from screwball comedy to literary drama, and she received a record four Academy Awards for Lead Acting Performances, plus eight further nominations. In 1999, Hepburn was named by the American Film Institute the greatest female star of Classic Hollywood Cinema. Read more on Wikipedia

Since 2007, the English Wikipedia page of Katharine Hepburn has received more than 10,994,882 page views. Her biography is available in 88 different languages on Wikipedia making her the 52nd most popular actor.

Among actors, Katharine Hepburn ranks 51 out of 8,832. Before her are Michael Douglas, Christopher Lee, Grace Kelly, Harrison Ford, Steven Seagal, and Rutger Hauer. After her are Marcello Mastroianni, Anthony Quinn, Omar Sharif, Roger Moore, Nicolas Cage, and Will Smith.