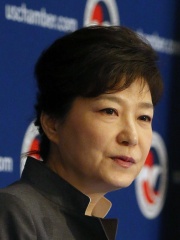 Park Geun-hye (Korean: 박근혜; Hanja: 朴槿惠; RR: Bak Geun(-)hye; IPA: [pak‿k͈ɯn.hje]; often in English ; born 2 February 1952) is a former South Korean politician who served as the 11th president of South Korea from 2013 until 2017, when she was impeached and a year later convicted on related corruption charges. Park was the first woman to be elected president, and also the first female president popularly elected as head of state in East Asia. She was also the first South Korean president to be born after the founding of the First Republic of Korea. Read more on Wikipedia

Park Geun-hye is most famous for being the first female president of South Korea.

Among politicians, Park Geun-hye ranks 1,107 out of 15,710. Before her are Harold Macmillan, Patrice de MacMahon, Zedekiah, Artaxerxes III, Grand Duchess Tatiana Nikolaevna of Russia, and Alexander I of Macedon. After her are Muhammad XII of Granada, Queen Paola of Belgium, Gustáv Husák, Habib Bourguiba, Jianwen Emperor, and Klement Gottwald.