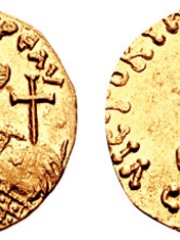 Leontius (Greek: Λεόντιος, romanized: Leóntios; c. 660 – c. 15 February 706), was Byzantine emperor from 695 to 698. Little is known of his early life, other than that he was born in Isauria in Asia Minor. He was given the title of patrikios, and made strategos of the Anatolic Theme under Emperor Constantine IV. Read more on Wikipedia

Leontios is most famous for being the founder of the monastery on Mount Athos in Greece.

Page views of Leontios by language

Among politicians, Leontios ranks 4,391 out of 15,577. Before him are Edigu, Archduchess Marie Caroline of Austria, Ferdinand, Duke of Viseu, Jan Smuts, Princess Olga of Greece and Denmark, and Émile Lahoud. After him are Philipp Bouhler, Dardanus, Vicente Guerrero, Rudolf Brandt, Tage Erlander, and Jia Xu.

Among people born in 660, Leontios ranks 3. Before him are Empress Genmei and Andrew of Crete. After him are Adela of Pfalzel, Cunipert, and Alpaida. Among people deceased in 705, Leontios ranks 6. Before him are Wu Zetian, Abd al-Malik ibn Marwan, Pope John VI, Tiberius III, and Lambert of Maastricht. After him are Alpaida and Aldfrith of Northumbria.