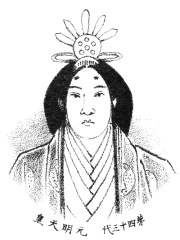 Empress Genmei (元明天皇, Genmei-tennō, April 20, 660 – December 29, 721), also known as Empress Genmyō, was the 43rd monarch of Japan, according to the traditional order of succession. Genmei's reign spanned the years 707 through 715 CE.In the history of Japan, Genmei was the fourth of eight women to take on the role of empress regnant. The three female monarchs before Genmei were Suiko, Kōgyoku/Saimei, and Jitō. Read more on Wikipedia

Empress Genmei, who ruled from 794 to 807, is most famous for her introduction of the era system.

Among politicians, Empress Genmei ranks 2,403 out of 15,577. Before her are Émile Loubet, Isabella II of Jerusalem, Ali al-Sistani, Marie José of Belgium, Siptah, and Duchess Elisabeth of Württemberg. After her are Unas, Infante Carlos, Count of Molina, Grigory Orlov, Lyudmila Putina, Sancho III of Pamplona, and Alboin.