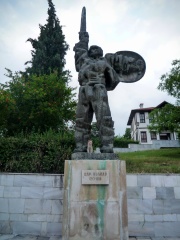 Ivaylo (died 1281), also spelled Ivailo (Bulgarian: Ивайло), was a rebel leader who ruled briefly as tsar of Bulgaria. In 1277, he spearheaded a peasant uprising and forced the Bulgarian nobility to accept him as emperor. He reigned as emperor from 1278 to 1279, scoring victories against the Byzantines and the Mongols. Read more on Wikipedia

Page views of Ivaylo of Bulgarias by language

Among politicians, Ivaylo of Bulgaria ranks 4,520 out of 15,577. Before him are George Papandreou, Teuta, Chindasuinth, Bakir Izetbegović, Georgy Pyatakov, and Konstantinos Mitsotakis. After him are Enmebaragesi, Michal Kováč, Juan, Count of Montizón, Bernard of Italy, Sophia, and Alar Karis.

Among people born in 1281, Ivaylo of Bulgaria ranks 4. Before him are Rudolf I of Bohemia, Külüg Khan, and Yury of Moscow. After him are Agnes of Austria, Hamdallah Mustawfi, Waldemar, Margrave of Brandenburg-Stendal, Nizamüddin Ahmed Pasha, Castruccio Castracani, and Henry, 3rd Earl of Lancaster. Among people deceased in 1281, Ivaylo of Bulgaria ranks 2. Before him is Ertuğrul. After him are Gertrude of Hohenberg, Anna of Hungary, Henry V, Count of Luxembourg, Chabi, Władysław Opolski, and John II, Margrave of Brandenburg-Stendal.