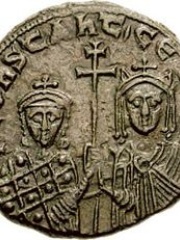 Zoe Karbonopsina was a Byzantine empress from the Macedonian dynasty. She was the wife of Emperor Leo VI the Wise and the mother of Emperor Constantine VII. She is most famous for being the first empress to rule in her own name.

Among politicians, Zoe Karbonopsina ranks 4,477 out of 15,577. Before her are Marie Anne de Bourbon, False Dmitry II, Princess Sophie of Sweden, Gesalec, Charles Michel, and Pausanias of Sparta. After her are António Costa, Prince Philippe, Duke of Orléans, Magnus VI of Norway, Theudis, Victor Klemperer, and Anna von Schweidnitz.

Among people born in 900, Zoe Karbonopsina ranks 17. Before her are Pope Leo VII, Robert the Strong, Berengar II of Italy, Guy III of Spoleto, Pope Leo VIII, and Banū Mūsā. After her are Theodora, Hermann Billung, Fajsz, George Hamartolos, Symeon the Metaphrast, and Mojmir II of Moravia. Among people deceased in 1000, Zoe Karbonopsina ranks 5. Before her are Olaf Tryggvason, Bjarni Herjólfsson, Harthacnut I of Denmark, and Al-Maqdisi. After her are García Sánchez II of Pamplona, Henry of Speyer, Abu-Mahmud Khojandi, Abū Sahl al-Qūhī, Bertha of Swabia, Joseph Genesius, and Matsyendranatha.