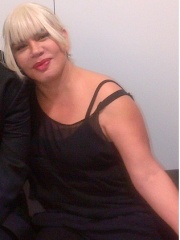 Sezen Aksu (Turkish pronunciation: [seˈzen ˈaksu]; born Fatma Sezen Yıldırım; 13 July 1954) is a Turkish pop music singer, songwriter and producer who has sold over 40 million albums worldwide. Her nicknames include the "Queen of Turkish Pop" and "Minik Serçe"("Little Sparrow"). Aksu's influence on Turkish pop and world music has continued since her debut in 1975, and has been reinforced by her patronage of and collaboration with many other musicians, including Sertab Erener, Şebnem Ferah, Aşkın Nur Yengi, Hande Yener, Yıldız Tilbe, Işın Karaca, Seden Gürel, Harun Kolçak and Levent Yüksel. Read more on Wikipedia

Among SINGERS In Turkey