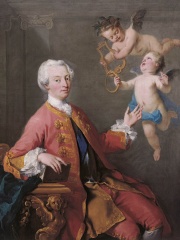 Frederick, Prince of Wales, KG (Frederick Louis; 1 February 1707 – 31 March 1751), was heir apparent to the British throne from 1727 until his death from a lung injury at the age of 44. He was the eldest but estranged son of King George II and Caroline of Ansbach, and the father of King George III. Under the Act of Settlement passed by the English Parliament in 1701, Frederick was fourth in the line of succession to the British throne at birth, after his great-grandmother, paternal grandfather and father. Read more on Wikipedia

Page views of Frederick, Prince of Wales by language

Among noblemen, Frederick, Prince of Wales ranks 168 out of 843. Before him are Joanna Elisabeth of Holstein-Gottorp, Maria Anna of Bavaria, Archduchess Anna of Austria, Raziye Sultan, Eleonora Gonzaga, and Prince Albert Victor, Duke of Clarence and Avondale. After him are Princess Marie of Hohenzollern-Sigmaringen, Rupprecht, Crown Prince of Bavaria, Duchess Mathilde Ludovika in Bavaria, Nicholas Alexandrovich, Tsesarevich of Russia, Grand Duke Konstantin Nikolayevich of Russia, and Prince Bertil, Duke of Halland.