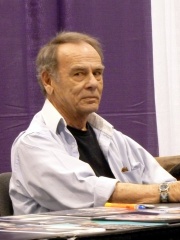 Robert Dean Stockwell (March 5, 1936 – November 7, 2021) was an American film, television and stage actor with a career spanning over 70 years. As a child actor under contract to Metro-Goldwyn-Mayer, he first came to the public's attention in films including Anchors Aweigh (1945), The Green Years (1946), Gentleman's Agreement (1947), The Boy with Green Hair (1948), and Kim (1950). As a young adult, he had a lead role in the 1957 Broadway and 1959 screen adaptation of Compulsion; and in 1962 he played Edmund Tyrone in the film version of Long Day's Journey into Night, for which he won two Best Actor Awards at the Cannes Film Festival. He was nominated for a Golden Globe Award for Best Actor – Motion Picture Drama for his starring role in the 1960 film version of D. H. Read more on Wikipedia