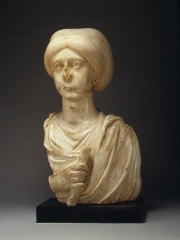 Anicia Juliana (Constantinople, 462 – 527/528) was a Late Antique Roman imperial princess, wife of the magister militum of the eastern Roman empire, Areobindus Dagalaiphus Areobindus, patron of the great Church of St Polyeuctus in Constantinople, and owner of the Vienna Dioscurides. She was the daughter of the Roman emperor Olybrius (r. 472) and his wife Placidia, herself the daughter of the emperor Valentinian III (r. Read more on Wikipedia

Among companions, Anicia Juliana ranks 516 out of 687. Before her are Isabella of Burgundy, Queen of Germany, Douce I, Countess of Provence, Gisela, Abbess of Chelles, Princess Dagmar of Denmark, Aquilia Severa, and Sallustia Orbiana. After her are Margravine Magdalene Sibylle of Brandenburg-Bayreuth, Alexei Razumovsky, Marie of Champagne, Julia Cornelia Paula, Maria Caterina Brignole, and Princess Thyra of Denmark.