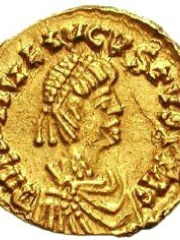 Flavius Romulus Augustus (c. AD 460 – after 476, possibly still alive as late as 507), known derisively and historiographically as Romulus Augustulus, was the Roman emperor who ruled the Western Roman Empire from 31 October 475 until 4 September 476. He is often described as the "last Western Roman emperor", though some historians consider this to be Julius Nepos. Read more on Wikipedia

Since 2007, the English Wikipedia page of Romulus Augustulus has received more than 1,090,013 page views. His biography is available in 70 different languages on Wikipedia making him the 47th most popular religious figure.

Among religious figures, Romulus Augustulus ranks 49 out of 2,001. Before him are Isaac, Pope Alexander VI, Pope Clement VII, Benedict of Nursia, Pope Gregory I, and Saint Valentine. After him are Thomas the Apostle, Pope Gregory XIII, Pope Pius XI, Jerome, Isaiah, and Pope Pius IX.