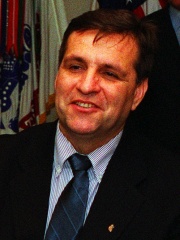 Boris Trajkovski (Macedonian: Борис Трајковски [ˈbɔris ˈtrajkɔfski] (listen); 25 June 1956 – 26 February 2004) was the president and Supreme Commander of the Republic of Macedonia from 1999 to 2004, when he died in a plane crash. Trajkovski was born into a Methodist family. His father, Kiro, who died in September 2008, was a landworker who had served in the Bulgarian Army and had been imprisoned for two years for feeding prisoners of war. Read more on Wikipedia

Since 2007, the English Wikipedia page of Boris Trajkovski has received more than 114,403 page views. His biography is available in 42 different languages on Wikipedia making him the 6,196th most popular politician.

Among politicians, Boris Trajkovski ranks 6,159 out of 14,801. Before him are Anna of Hohenstaufen, Piers Gaveston, 1st Earl of Cornwall, Tippu Tip, Konrad von Jungingen, Gallus Anonymus, and Anushtegin Gharchai. After him are Gyula Gömbös, Roger III of Sicily, Vologases VI, Mohamed Mahmoud Ould Louly, Henry of Flanders, and Sibylla of Anjou.