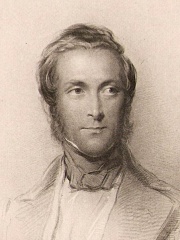 James Andrew Broun-Ramsay, 1st Marquess of Dalhousie (22 April 1812 – 19 December 1860), also known as Lord Dalhousie, styled Lord Ramsay until 1838 and known as The Earl of Dalhousie between 1838 and 1849, was a Scottish statesman and colonial administrator in British India. He served as Governor-General of India from 1848 to 1856. He established the foundations of the modern educational system in India by adding mass education in addition to elite higher education. Read more on Wikipedia

Among politicians, James Broun-Ramsay, 1st Marquess of Dalhousie ranks 5,017 out of 15,577. Before him are Attalus, Bertha of Savoy, Ernő Gerő, Gunther, Raymond of Burgundy, and Joaquim Chissano. After him are Sophia of Halshany, Vittoria della Rovere, Glafcos Clerides, Nizam-ul-Mulk, Asaf Jah I, Mithridates V of Pontus, and Maria Teresa, Grand Duchess of Luxembourg.