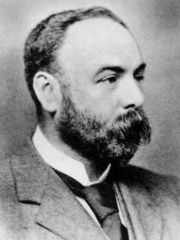 Daniel Burley Woolfall (15 June 1852 – 24 October 1918) was the second president of FIFA. An English Football Association administrator from Blackburn, Woolfall was elected as president on 4 June 1906. A key aim during his presidency was to achieve uniform football rules on an international level and he played a prominent role in the drafting of FIFA's new constitution. Under Woolfall, the application of the Laws of the Game, established under the English model, became compulsory and a clear definition was made of international matches. Read more on Wikipedia

Since 2007, the English Wikipedia page of Daniel Burley Woolfall has received more than 66,755 page views. His biography is available in 31 different languages on Wikipedia making him the 4,603rd most popular politician.

Among politicians, Daniel Burley Woolfall ranks 4,577 out of 14,801. Before him are Emperor Go-Nijō, Michał Kleofas Ogiński, 10th Dalai Lama, Antonio Segni, Ron Paul, and Saad Zaghloul. After him are Sisebut, Phraates II, Karl I, Prince of Liechtenstein, Barak, Balash, and Ranavalona II.