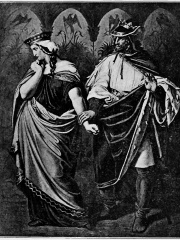 Gundaharius or Gundahar (died 437), better known by his legendary names Gunther (Middle High German: Gunther) or Gunnar (Old Norse: Gunnarr), was a historical king of Burgundy in the early 5th century. Gundahar is attested as ruling his people shortly after they crossed the Rhine into Roman Gaul. He was involved in the campaigns of the failed Roman usurper Jovinus before the latter's defeat, after which he was settled on the left bank of the Rhine as a Roman ally. Read more on Wikipedia

Page views of Gunthers by language

Among politicians, Gunther ranks 5,014 out of 15,577. Before him are Ashikaga Yoshimitsu, Eurybiades, Agis III, Attalus, Bertha of Savoy, and Ernő Gerő. After him are Raymond of Burgundy, Joaquim Chissano, James Broun-Ramsay, 1st Marquess of Dalhousie, Sophia of Halshany, Vittoria della Rovere, and Glafcos Clerides.

Among people born in 400, Gunther ranks 25. Before him are Shapur III, Radagaisus, Frumentius, Sozomen, Eutropius, and Joannes. After him are Priscus Attalus, Servatius of Tongeren, Quintus Smyrnaeus, Meletius of Antioch, Pelagia, and Vincent of Lérins. Among people deceased in 436, Gunther ranks 1.