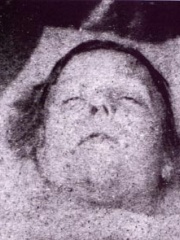 Mary Ann "Polly" Nichols (née Walker; 26 August 1845 – 31 August 1888) was the first canonical victim of the unidentified serial killer known as Jack the Ripper, who is believed to have murdered and mutilated at least five women in the Whitechapel and Spitalfields districts of London from late August to early November 1888.The two previous murders linked to the Whitechapel murderer are unlikely to have been committed by Jack the Ripper, although the murder of Mary Ann Nichols was initially linked to this series, increasing both press and public interest into the criminal activity and general living conditions of the inhabitants of the East End of London. Read more on Wikipedia

Mary Ann Nichols was a prostitute who was murdered by Jack the Ripper in 1888.

Among religious figures, Mary Ann Nichols ranks 867 out of 2,272. Before her are Jane Frances de Chantal, Thaïs, John of Leiden, Lawrence of Brindisi, John of Ávila, and Joseph Franklin Rutherford. After her are Juliana of Nicomedia, Abdullah ibn Salam, Gianna Beretta Molla, Melania the Younger, Caesar Baronius, and Saint Emeric of Hungary.