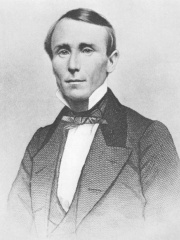 William Walker (May 8, 1824 – September 12, 1860) was an American physician, lawyer, journalist and mercenary who organized several private military expeditions into Mexico and Central America with the intention of occupying the local nations and establishing slave-hold colonies, an enterprise then known as "filibustering". Walker usurped the presidency of Nicaragua in July 1856 at the request of Liberal Democratic Party of Nicaragua and ruled until May 1, 1857, when he was forced out of the presidency and the country by a coalition of Central American armies. Read more on Wikipedia

Among politicians, William Walker ranks 4,063 out of 15,710. Before him are Baldwin V, Count of Flanders, Prince Charles, Count of Flanders, Artaphernes, Stephen II, Ban of Bosnia, Machaon, and Chen Shou. After him are Sancho I of León, Ana Pauker, Juan Almeida Bosque, Henry Frederick, Prince of Wales, Malcolm IV of Scotland, and Emperor Zhezong.