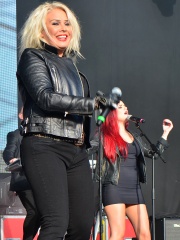 Kim Wilde (born Kim Smith; 18 November 1960) is an English pop singer, author, DJ and television presenter. She first saw success in 1981 with her debut single "Kids in America", which reached number two in the UK. In 1983, she received the Brit Award for Best British Female solo artist. In 1986, she had a UK number two hit with a reworked version of the Supremes' song "You Keep Me Hangin' On", which also topped the US Billboard Hot 100 in 1987. Read more on Wikipedia

Since 2007, the English Wikipedia page of Kim Wilde has received more than 2,132,527 page views. Her biography is available in 37 different languages on Wikipedia making her the 331st most popular singer.