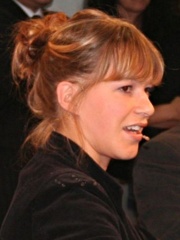 Franka Potente (German: [fʁaŋka po.ˈtɛn.tə] (listen); born 22 July 1974) is a German actress and singer. She first appeared in the comedy film After Five in the Forest Primeval (1995), for which she won a Bavarian Film Award for Best Young Actress. Her breakthrough came in 1998, when she portrayed the titular role in the acclaimed action thriller Run Lola Run, for which she won a BAMBI Award for Best Actress. Read more on Wikipedia

Since 2007, the English Wikipedia page of Franka Potente has received more than 2,533,263 page views. Her biography is available in 42 different languages on Wikipedia making her the 2,428th most popular actor.

Among ACTORS In Kazakhstan

Among actors born in Kazakhstan, Franka Potente ranks 2. Before her are Oleg Yankovsky (1944). After her are Johanna Wokalek (1975).