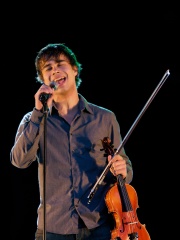 Alexander Igorevich Rybak (Russian: Александр Игоревич Рыбак) or Alyaxandr Iharavich Rybak (Belarusian: Аляксандр Ігаравіч Рыбак; born 13 May 1986), is a Belarusian-Norwegian singer-composer, violinist, pianist and actor.Though based in Oslo, Rybak extensively worked on television programmes and on tours in Russia, Belarus, Ukraine and Sweden throughout the early 2010s. Singing in mainly English and Russian, Rybak, in his early twenties, held on to a teen idol status in Scandinavia, Eastern Europe, and to a certain extent in Western Asia. His debut album, Fairytales, charted in the top 20 in nine European countries, including a top position in Norway and Russia. Read more on Wikipedia

Since 2007, the English Wikipedia page of Alexander Rybak has received more than 925,012 page views. His biography is available in 59 different languages on Wikipedia making him the 568th most popular singer.

Among SINGERS In Belarus