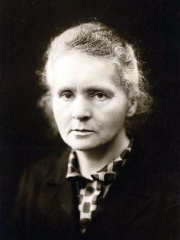 Marie Skłodowska Curie ( KEWR-ee, French: [kyʁi], Polish: [kʲiˈri]), born Maria Salomea Skłodowska (Polish: [ˈmarja salɔˈmɛa skwɔˈdɔfska]; 7 November 1867 – 4 July 1934), was a Polish and naturalized-French physicist and chemist who conducted pioneering research on radioactivity. She was the first woman to win a Nobel Prize, is the first person and the only woman to win the Nobel prize twice, and is the only person to win the Nobel Prize in two different scientific fields. She was part of the Curie family legacy of five Nobel Prizes. Read more on Wikipedia

Since 2007, the English Wikipedia page of Marie Curie has received more than 11,147,782 page views. Her biography is available in 163 different languages on Wikipedia making her the 3rd most popular physicist.