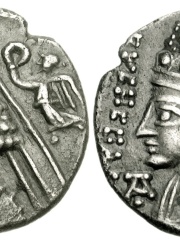 Phraates V (Parthian: 𐭐𐭓𐭇𐭕 Frahāt), also known by the diminutive version of his name, Phraataces (also spelled Phraatakes), was the King of Kings of the Parthian Empire from 2 BC to 4 AD. He was the younger son of Phraates IV (r. 37 BC – 2 BC) and Musa, who ruled with him. Under Phraates V, a war threatened to break out between the Parthian and Roman empires over the control of Armenia and Mesopotamia. Read more on Wikipedia

Phraates V was most famous for his reforms in the government, which were intended to reduce corruption and improve the lives of the people. He was also the first king to wear a crown with a ram's head on it, which would later become the symbol of the Arsacid dynasty.

Page views of Phraates VS by language

Among people born in 100 BC, Phraates V ranks 28. Before him are Antipater the Idumaean, Publilius Syrus, Artavasdes II of Armenia, Mary of Clopas, Judas of Galilee, and Antigonus II Mattathias. After him are Marcus Antistius Labeo, Vonones I, Tigranes III, Quintus Caecilius Metellus Pius Scipio Nasica, Alexander Polyhistor, and Artaxias II. Among people deceased in 4, Phraates V ranks 5. Before him are Gaius Caesar, Hyeokgeose of Silla, Nicolaus of Damascus, and Gaius Asinius Pollio.