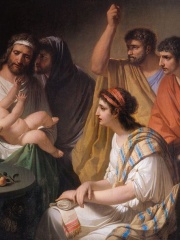 Cypselus (Greek: Κύψελος, Kypselos) was the first tyrant of Corinth in the 7th century BC. With increased wealth and more complicated trade relations and social structures, Greek city-states tended to overthrow their traditional hereditary priest-kings; Corinth, the richest archaic polis, led the way. Like the signori of late medieval and Renaissance Italy, the tyrants usually seized power at the head of some popular support. Often the tyrants upheld existing laws and customs and were highly conservative as to cult practices, thus maintaining stability with little risk to their own personal security. Read more on Wikipedia

Since 2007, the English Wikipedia page of Cypselus has received more than 77,885 page views. His biography is available in 22 different languages on Wikipedia. Cypselus is the 4,405th most popular politician (down from 4,238th in 2019), the 281st most popular biography from Greece (down from 266th in 2019) and the 122nd most popular Greek Politician.

Page views of Cypseluses by language

Among politicians, Cypselus ranks 4,405 out of 15,710. Before him are Nouri al-Maliki, Bardylis, Arbogast, Emperor Seinei, Yury Luzhkov, and Manius Curius Dentatus. After him are Caroline Kennedy, Lothar von Richthofen, Cus D'Amato, Konstantinos Mitsotakis, Pleistoanax, and Ibn Tumart.

Among people born in 700 BC, Cypselus ranks 18. Before him are Anacharsis, Necho I, Cylon of Athens, Sinsharishkun, Harpagus, and Phraortes. After him are Philip I of Macedon, Ashur-etil-ilani, Perdiccas I of Macedon, Bakenranef, Aristomenes, and Leon of Sparta. Among people deceased in 627 BC, Cypselus ranks 2. Before him is Ashurbanipal. After him are Ashur-etil-ilani, Sin-shumu-lishir, and Kandalanu.

Others Deceased in 627 BC