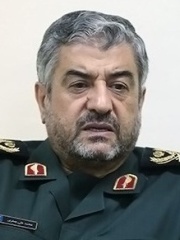 Major General Mohammad Ali Jafari (Persian: محمدعلی جعفری, born 1 September 1957, also known as Aziz Jafari and Ali Jafari) is a former commander-in-chief of the Iranian Revolutionary Guard Corps from 2007 to 2019. He was appointed by Supreme Leader Ali Khamenei on 1 September 2007, succeeding Major General Yahya Rahim Safavi.According to a 2 September 2007 report by Radio Free Europe, Radio Farda has described Jafari has been close to the conservative subfaction, which includes Mohsen Rezaee, the secretary of the Expediency Discernment Council and former commander of the IRGC and Mohammad Bagher Ghalibaf, a former IRGC member and the mayor of Tehran. The replacement of Safavi was thought to be a move to strengthen the conservative faction as a counterweight to the radicalizers around President Mahmoud Ahmadinejad, whom Safavi is close to."Observers appear to regard Jafari as principally a tactician, organizer, and 'technical' military man," according to Radio Free Europe. Read more on Wikipedia