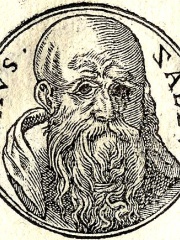 Zaleucus (Ancient Greek: Ζάλευκος; fl. 7th century BC) was the Greek lawgiver of Epizephyrian Locri and a Pythagorean philosopher, in Italy. According to the Suda, he was previously a slave and a shepherd, and after having been educated he gave laws to his fellow-citizens.Most probably, he devised the first written Greek law code, the Locrian code, in the 7th century BC, which among other things stipulated that: A free-born woman may not be accompanied by more than one female slave, unless she is drunk; she may not leave the city during the night, unless she is planning to commit adultery; she may not wear gold jewelry or a garment with a purple border, unless she is a courtesan; and a husband may not wear a gold-studded ring or a cloak of Milesian fashion unless he is bent upon prostitution or adultery. Read more on Wikipedia

Since 2007, the English Wikipedia page of Zaleucus has received more than 28,839 page views. His biography is available in 18 different languages on Wikipedia making him the 9th most popular judge.

Page views of Zaleucuses by language