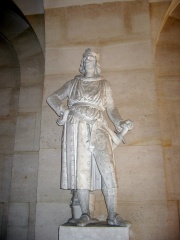 Robert III of Artois (1287 – between 6 October & 20 November 1342) was Lord of Conches-en-Ouche, of Domfront, and of Mehun-sur-Yèvre, and in 1309 he received as appanage the county of Beaumont-le-Roger in restitution for the County of Artois, which he claimed. Read more on Wikipedia

Page views of Robert III of Artois by language

Among noblemen, Robert III of Artois ranks 253 out of 843. Before him are Victoria, Crown Princess of Sweden, Bruno the Great, Lucrezia de' Medici, Duchess of Ferrara, Louis, Duke of Brittany, Grand Duke Alexander Alexandrovich of Russia, and Frederick VI, Duke of Swabia. After him are Hedvig Elisabeth Charlotte of Holstein-Gottorp, Princess Mary Adelaide of Cambridge, Antonio Farnese, Duke of Parma, Princess Cecilie of Baden, Anna d'Este, and Princess Antoinette, Baroness of Massy.