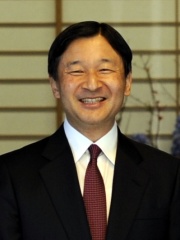 Naruhito (徳仁, pronounced [naɾɯꜜçi̥to]; born 23 February 1960) is the emperor of Japan. He acceded to the Chrysanthemum Throne on 1 May 2019, beginning the Reiwa era, following the abdication of his father, Akihito. Read more on Wikipedia

Naruhito is most famous for being the Crown Prince of Japan. He is the eldest son of Emperor Akihito and Empress Michiko, and he is the heir to the Chrysanthemum Throne.

Page views of Naruhitos by language

Among noblemen, Naruhito ranks 31 out of 842. Before him are Grand Duchess Olga Nikolaevna of Russia, Ramesses I, Diana, Princess of Wales, Eleanor of Aquitaine, Edward VII, and Charles the Bold. After him are Rainier III, Prince of Monaco, Marie de' Medici, Ramesses III, Alexei Nikolaevich, Tsarevich of Russia, El Cid, and Ludovico Sforza.