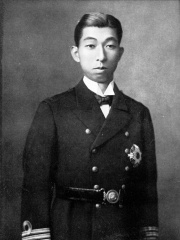 Nobuhito, Prince Takamatsu (高松宮宣仁親王, Takamatsu-no-miya Nobuhito Shinnō, 3 January 1905 – 3 February 1987) was the third son of Emperor Taishō (Yoshihito) and Empress Teimei (Sadako) and a younger brother of Emperor Shōwa (Hirohito). He became heir to the Takamatsu-no-miya (formerly Arisugawa-no-miya), one of the four shinnōke or branches of the imperial family entitled to inherit the Chrysanthemum throne in default of a direct heir. From the mid-1920s until the end of World War II, Prince Takamatsu pursued a career in the Japanese Imperial Navy, eventually rising to the rank of captain. Read more on Wikipedia

Among noblemen, Nobuhito, Prince Takamatsu ranks 534 out of 843. Before him are Prince Baudouin of Belgium, John Frederick, Duke of Württemberg, Elena Asenina of Bulgaria, Princess Albertina Frederica of Baden-Durlach, Eleanor of Woodstock, and Archduchess Maria Anna of Austria. After him are Rupert I, Elector Palatine, Charlene, Princess of Monaco, Princess Maria Bona of Savoy-Genoa, Hugh V, Duke of Burgundy, Henry Julius, Duke of Brunswick-Lüneburg, and Princess Antoinette of Saxe-Coburg-Saalfeld.