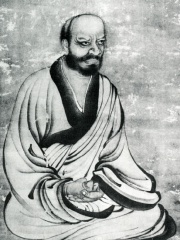 Linji Yixuan is most famous for his teachings on the "Four Great Vows." He believed that the Buddha's teachings were not enough for people to achieve enlightenment. Linji Yixuan believed that people needed to make vows to themselves in order to overcome their own delusions. The Four Great Vows are: to be born as a human being, to become a Buddha, to liberate all beings, and to acquire the wisdom of the Buddha.

Among philosophers, Linji Yixuan ranks 457 out of 1,089. Before him are Leo Strauss, Vincent of Beauvais, Luce Irigaray, Francisco Ferrer, James Ussher, and Phaedo of Elis. After him are Roger Scruton, Jean-Luc Nancy, Dong Zhongshu, Priscian, Antiochus of Ascalon, and Berengar of Tours.

Among people born in 850, Linji Yixuan ranks 12. Before him are Ingólfr Arnarson, Berengar I of Italy, Pope Romanus, Pope Stephen V, Pope Stephen VI, and Pope Stephen VII. After him are Istakhri, Emperor Seiwa, Adelaide of Paris, Vladimir of Bulgaria, Abu Zayd al-Balkhi, and Bruno, Duke of Saxony. Among people deceased in 866, Linji Yixuan ranks 3. Before him are Al-Kindi and Robert the Strong. After him are Bardas, Ordoño I of Asturias, Liudolf, Duke of Saxony, Al-Musta'in, Charles the Child, and Eberhard of Friuli.