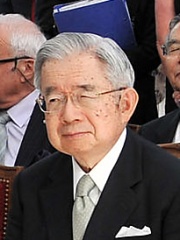 Masahito, Prince Hitachi (常陸宮正仁親王, Hitachi-no-miya Masahito Shinnō, born 28 November 1935) is a member of the Imperial House of Japan and the younger brother of Emperor Emeritus Akihito. He is the second son and sixth born child of Emperor Shōwa and Empress Kōjun and is third in line to the Chrysanthemum Throne. Read more on Wikipedia

Since 2007, the English Wikipedia page of Masahito, Prince Hitachi has received more than 357,951 page views. His biography is available in 19 different languages on Wikipedia making him the 3,911th most popular politician.

Among politicians, Masahito, Prince Hitachi ranks 3,888 out of 14,801. Before him are Everard des Barres, Richard of Shrewsbury, Duke of York, Clovis III, Ramiro II of León, Luigi Einaudi, and Richard I of Normandy. After him are Ptolemy of Aloros, Rudolf II, Duke of Austria, Infanta Marie Anne of Portugal, Aristides Pereira, Emperor Yōmei, and Ingvar Carlsson.