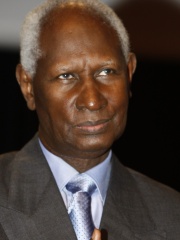 Abdou Diouf (US: (listen) AHB-doo dee-OOF; Serer: Abdu Juuf; born 7 September 1935) is a Senegalese politician who was the second President of Senegal, in office from 1981 to 2000. Diouf is notable both for coming to power by peaceful succession, and leaving willingly after losing the 2000 presidential election to Abdoulaye Wade. Read more on Wikipedia

Among politicians, Abdou Diouf ranks 4,108 out of 15,577. Before him are Charles, Duke of Mayenne, Frederick Francis III, Grand Duke of Mecklenburg-Schwerin, Perdiccas I of Macedon, Pyotr Krasnov, Borisav Jović, and Mehmed I Giray. After him are Henry Tingle Wilde, Hyeonjong of Goryeo, Bahram III, Agis I, Berenice III of Egypt, and Louis I, Grand Duke of Hesse.

Among POLITICIANS In Senegal