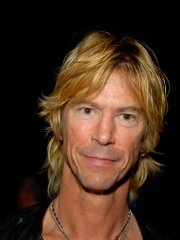 Michael Andrew "Duff" McKagan (born February 5, 1964), sometimes credited as Duff "Rose" McKagan, is an American multi-instrumentalist, singer, songwriter and author. He played bass for twelve years in the hard rock band Guns N' Roses, with whom he achieved worldwide success in the late 1980s and early 1990s. McKagan rejoined the band in 2016, following their induction into the Rock and Roll Hall of Fame.Toward the end of his first tenure with Guns N' Roses, McKagan released a solo album, Believe in Me (1993), and formed the short-lived supergroup Neurotic Outsiders. Read more on Wikipedia

Duff McKagan is most famous for being the bassist and co-founder of the band Guns N' Roses.