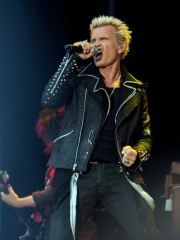 William Michael Albert Broad (born 30 November 1955), known professionally as Billy Idol, is an English musician, singer, songwriter, and actor who holds dual British and American citizenship. He first achieved fame in the 1970s emerging from the London punk rock scene as the lead singer of the group Generation X. Subsequently, he embarked on a solo career which led to international recognition and made Idol a lead artist during the MTV-driven "Second British Invasion" in the United States. The name "Billy Idol" was inspired by a schoolteacher's description of him as "idle".Idol began his music career in late 1976 as a guitarist in the punk rock band Chelsea. Read more on Wikipedia