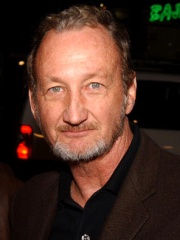 Robert Barton Englund (born June 6, 1947) is an American actor and director, best known for playing the supernatural serial killer Freddy Krueger in the Nightmare on Elm Street film series. Classically trained at the Royal Academy of Dramatic Art, Englund began his career as a stage actor in regional theatre, and made his film debut in the 1974 drama film Buster and Billie. After supporting roles in films like Stay Hungry (1976), A Star Is Born (1976), and Big Wednesday (1977), he had his breakthrough as resistance fighter Willie in the 1983 miniseries V and its subsequent sequel series. Read more on Wikipedia

Robert Englund is most famous for his portrayal of the iconic horror villain, Freddy Krueger.