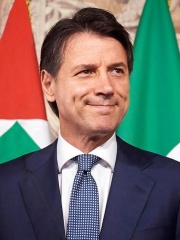 Giuseppe Conte (Italian pronunciation: [dʒuˈzɛppe ˈkonte]; born 8 August 1964) is an Italian jurist and politician who served as Prime Minister of Italy from June 2018 to February 2021. He has been the president of the Five Star Movement since August 2021.Conte spent the greater part of his career as a law professor and was also a member of the Italian Bureau of Administrative Justice from 2013 to 2018. Following the 2018 general election, he was proposed as the independent leader of a coalition government between the Five Star Movement (M5S) and the League, despite his having never held any political position before. Read more on Wikipedia

Giuseppe Conte is most famous for being the Prime Minister of Italy.

Among politicians, Giuseppe Conte ranks 2,801 out of 15,710. Before him are Jomo Kenyatta, Anna Leopoldovna, Charles III, Duke of Savoy, Emperor Qianshao of Han, Leopold, Prince of Hohenzollern, and Senedj. After him are Haakon III of Norway, Tancred, King of Sicily, Gotse Delchev, Bülent Ecevit, Ramon Berenguer IV, Count of Barcelona, and Richard Neville, 16th Earl of Warwick.