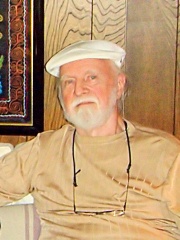 Richard Burton Matheson (February 20, 1926 – June 23, 2013) was an American author and screenwriter, primarily in the fantasy, horror, and science fiction genres. He is best known as the author of I Am Legend, a 1954 science fiction horror novel that has been adapted for the screen three times. Matheson himself was co-writer of the first film version, The Last Man on Earth, starring Vincent Price, which was released in 1964. Read more on Wikipedia

Richard Matheson is most famous for his horror novel "I Am Legend" which was adapted into a film starring Will Smith.

Among writers, Richard Matheson ranks 870 out of 5,794. Before him are Theodor Fontane, Julius Fučík, Pietro Bembo, Waris Dirie, Cao Xueqin, and Else Lasker-Schüler. After him are Kobayashi Issa, Nestor the Chronicler, Tukaram, Władysław Reymont, Bruce Chatwin, and Luqman.