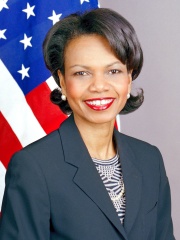 Condoleezza Rice ( KON-də-LEE-zə; born November 14, 1954) is an American diplomat and political scientist who is the current director of the Hoover Institution at Stanford University. A member of the Republican Party, she previously served as the 66th United States secretary of state from 2005 to 2009 and as the 19th U.S. national security advisor from 2001 to 2005. Rice was the first female African-American secretary of state and the first woman to serve as national security advisor. Read more on Wikipedia

Condoleezza Rice was the first African-American woman to serve as U.S. Secretary of State. She served under President George W. Bush from 2001 to 2009.

Among politicians, Condoleezza Rice ranks 3,777 out of 15,577. Before her are King You of Zhou, Alfonso, Prince of Asturias, Catherine of Navarre, Alberto Fernández, Memnon, and Manfred Rommel. After her are Andrew Dickson White, Hibatullah Akhundzada, Princess Désirée, Baroness Silfverschiöld, Denis Thatcher, Nguyễn Xuân Phúc, and Muazzez Sultan.